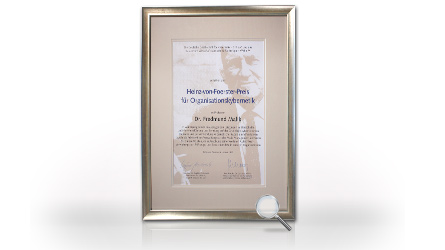 In January 2010 Prof. Dr. Fredmund Malik received the “Heinz von Foerster Prize” for organizational cybernetics at the university in Hagen. The jury voted unanimously for Malik as prizewinner.

He received the prize for his trendsetting development of universally applicable management systems based on cybernetics. The jury emphasized the central role of cybernetics in Malik’s career – from his diploma thesis and habilitation to this day.

Outstanding performance in the fields of company management, corporate and personnel consulting on the basis of cybernetic thinking and involving application of cybernetic models and procedures are honored with the Heinz von Foerster Prize for Organizational Cybernetics. The prize is awarded jointly by the Deutsche Gesellschaft für Kybernetik e.V. (German Society for Cybernetics – GfK) and the board of trustees of Wirtschaftskompetenz für Europa e.V. (Economic Expertise for Europe – KWE). Earlier holders of the prize include Professor Herbert Stachowiak and Professor Günter Ropohl.

Heinz von Foerster was an Austrian physicist, who is regarded as the co-founder of the science of cybernetics. He lived in the USA from 1949, where he cooperated with the pioneers of cybernetics – including Norbert Wiener, Warren McCulloch and John von Neumann – and established the Biological Computer Laboratory (BCL) at the University of Illinois, which became an important center for research into the fields of the cognitive sciences and epistemology. 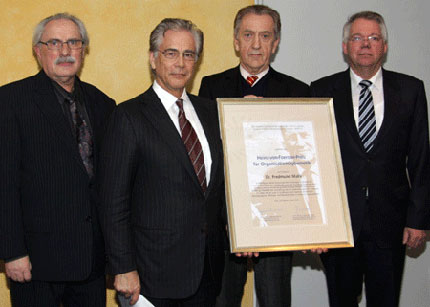